20Now among those who went up to worship at the festival (of the Passover) were some Greeks.  21They came to Philip, who was from Bethsaida in Galilee, and said to him, “Sir, we wish to see Jesus.” 22Philip went and told Andrew; then Andrew and Philip went and told Jesus. 23Jesus answered them,  “The hour has come for the Son of Man to be glorified.  24Very truly, I tell you, unless a grain of wheat falls into the earth and dies, it remains just a single grain; but if it dies, it bears much fruit.  25Those who love their life lose it, and  those who hate their life in this world will keep it for eternal life.  26Whoever serves me must follow me, and where I am, there will my servant be also. Whoever serves me, the Father will honor.  27“Now my soul is troubled. And what should I say—‘Father, save me from this hour’? No, it is for this reason that I have come to this hour.  28Father, glorify your name.” Then a voice came from heaven,  “I have glorified it, and I will glorify it again.” 29The crowd standing there heard it and said that it was thunder. Others said,“An angel has spoken to him.”30Jesus answered, “This voice has come for your sake, not for mine.  31Now is the judgment of this world; now the ruler of this world will be driven out.  32And I, when I am lifted up from the earth, will draw all people to myself.” 33He said this to indicate the kind of death he was to die.

Our cat, Melvyn, as many of you know his story, was a stray that showed up at my church in rural Minnesota one day.  When I petted him, the orange and white tabby followed me home. He was hungry and dirty. I fed him on the back steps. Then he cried at the back door all night, in the rain. In the morning, I opened the door and the wet cat came in. I fed him again and he decided to stay with us, even though my husband didn’t like cats, and worried that he might be plotting to kill us. 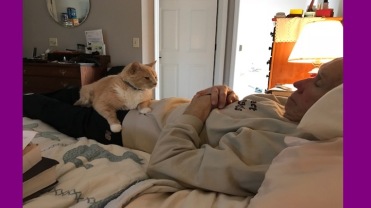 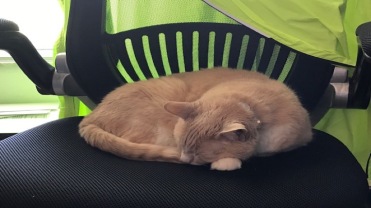 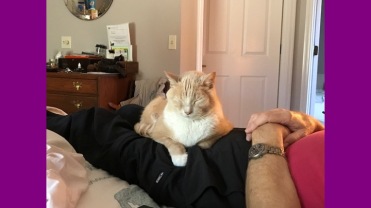 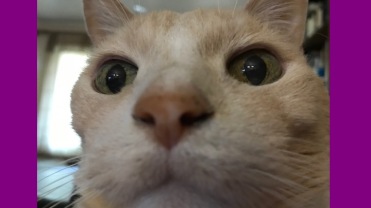 Five years and 1,200 miles later, Melvyn is still with us. He follows Jim and me all around the house. Wherever we go.  I think Melvyn is still grateful that we let him come and live with us, after living outside in Minnesota for who knows how long. I am pretty sure he never thinks about his old life anymore.  And he’s not the same scraggly, wild cat he used to be. Our love and care of him has transformed him.

Our cat’s devotion to those who love, nourish and rescue him from harm makes me think of the devotion God deserves from us because of his love, forgiveness and astonishing gift of new, abundant and everlasting life.

Our gospel reading begins with the arrival of some “Greeks,” who don’t directly approach Jesus. They go to one of his disciples, Philip of Bethsaida in Galilee.  One reason why the Greeks don’t go to Jesus may be that they are Gentiles and may fear rejection. Gentiles and Jews in ancient times do not associate with each other. They are uncircumcised, unclean. They don’t follow the food laws. They don’t speak Hebrew or live according to the Torah. They eat meat sacrificed to idols. They may worship other gods. But they may be God-fearers, Gentiles who worship the God of Abraham,  if they are in Jerusalem at the time of the great pilgrimage festival of Passover.

Why choose Philip? Possibly because his name is Greek, named for the father of Alexander the Great.  And he speaks Greek, coming from a predominantly Greek-speaking area. But also because he is willing to speak to the strangers; he is an enthusiastic follower of Jesus who is not timid about reaching out to others.

He is a fisherman when Jesus calls him in John 1:43–the third disciple to respond to Christ’s invitation, “Follow me.”

Philip immediately obeys, then tells his friend, Nathanael, in John 1:45, “We have found the one Moses wrote about in the Law, and about whom the prophets also wrote—Jesus of Nazareth, the son of Joseph.” And although Nathanael makes a rude remark about Nazareth, Philip invites his friend to,  “Come and see.”

Philip doesn’t go straight to Jesus with the Greeks’ request. He consults with Andrew, who has also introduced someone to Jesus. Andrew, in 1:40-42, after answering the call, tells his brother, Simon, “We have found the Messiah.” And he brings him to Jesus,  who looks at Simon and gives him a new name–“Cephas”–Peter. It isn’t clear why Philip goes first to Andrew for advice. He may be worried about the threats to Jesus’ life after he raises Lazarus from the dead; but those are coming from within the Jewish community, not from the Gentiles. Another reason for his hesitation may be that the disciples might not understand, yet, that the Messiah has come to save the world– and not just the Jewish people.

When Philip and Andrew finally go to him, Jesus doesn’t say if he will speak to the Gentiles, only that their coming signals the arrival of his “hour.”  The cross and his glorification loom ahead. But we can assume that he does welcome the Greeks because he says that when he will be “lifted up,” he will “draw all people” to himself. With the parable of a seed that dies but bears much fruit, he speaks of his death so that others might live, but also so that his disciples would be willing to give up their lives for His sake.

The most moving part of this passage is when we encounter the humanity of Christ. With the cross drawing near, Jesus says,  “Now my soul is troubled. And what should I say,  ‘Father, save me from this hour?’” This is an echo of his prayers in Mark 14:35-36 and Matthew 26:39 that “if possible the hour might pass from him.”  36 “Abba, Father,” he says in Mark, “everything is possible for you.  Take this cup from me.” But Jesus will always respond in perfect obedience to God. “Yet not what I want, but what you want,” he says in Mark, Matthew and Luke 22:42.  “Father,” he says in John 14:28, “Glorify your name.”

Christ promises his everlasting presence to all who follow him, saying in John 12:26,  “26Whoever serves me, must follow me,  and where I am, there will my servant be also.” This passage will come to mind later, in John 14, with another promise of his everlasting presence with his followers. After Jesus washes the disciples’ feet, breaks bread and shares the cup, and gives them a new commandment–to love one another, he comforts his fearful friends.  “Do not let your hearts be troubled,” he says.  “Believe in God, believe also in me.” He will prepare a place for each one of them in His Father’s house. And he will come again to take them to himself. “So that where I am,”  he says, “there you may be also.”

Friends, the Greeks’ wish to see Jesus and Philip and Andrew’s reluctance to bring them to him stirs me to ask if we might be    hesitant to share Jesus with people who are different from us  –in language, culture, nationality or religion? How comfortable are we speaking with those of other faiths or those with no faith at all? We know what Jesus would say about our reluctance. For he was lifted up to draw all people to himself.

Let us recommit ourselves to following the Lord ever so closely and gratefully, being open to sharing Christ with everyone. Let us reveal God’s love through encouraging words and acts of kindness and generosity.  We can trust him to transform our hearts, remove fear or prejudice from us so we may reach out to others, like Philip and Andrew, extending invitations to friends, siblings and strangers to, “Come and see.”

Heavenly Father, thank you for your transforming love for us and for your everlasting presence with us. We praise and thank you that you desire to draw all people to yourself. Guide us in your will; use us for your loving work. Remove all fear from us, Lord, for people who might be different than us. May we be perfectly obedient to you, following Christ’s example. Thank you for the ministries you have blessed us with at MIPC and for all the children and youth who participate in them. Bless them and their families, Lord! Empower us by your Spirit to reach out to our neighbors near and far, to be bold and invite friends, siblings and strangers to “come and see.” In Christ we pray. Amen.