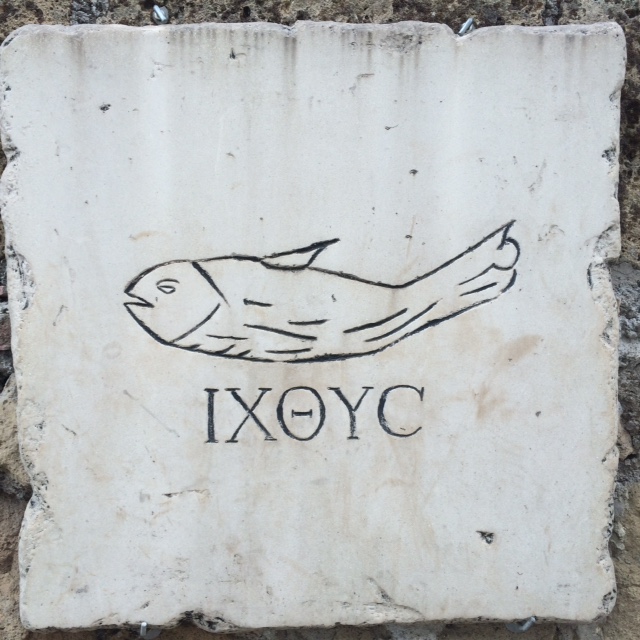 After these things Jesus showed himself again to the disciples by the Sea of Tiberias (the Sea of Galilee); and he showed himself in this way. Gathered there together were Simon Peter, Thomas called the Twin, Nathanael of Cana in Galilee, the sons of Zebedee, and two others of his disciples. Simon Peter said to them, ‘I am going fishing.’ They said to him, ‘We will go with you.’ They went out and got into the boat, but that night they caught nothing. Just after daybreak, Jesus stood on the beach; but the disciples did not know that it was Jesus. Jesus said to them, ‘Children, you have no fish, have you?’ They answered him, ‘No.’ He said to them, ‘Cast the net to the right side of the boat, and you will find some.’ So they cast it, and now they were not able to haul it in because there were so many fish. That disciple whom Jesus loved said to Peter, ‘It is the Lord!’

I’m back! Jim and I had a restful vacation. We had two friends from Minnesota visit with us. We ate together and came to see the church, and we went to the beach. Of course!

It was chilly that day–a cool breeze–and even Pat, a Minnesota native, was cool in shorts. But notice there’s some very hardy person behind us swimming! Brr! That water was cold!

Anyway, it was good to see them and just talk for hours. I’ve been gone 6 months! It was hard to say goodbye to them. They are such encouraging, joyful people! Pat was on the PNC at my last church. He was the first person I met in Renville as he made the initial interview by phone. He picked Jim and me up in his truck when we arrived at the Minneapolis airport the first time I went to Minnesota. He even loaned me his 2003 mustang convertible when I came a second time to meet the congregation.

I rode around Renville in style. :o)

Sharon brought two precious gifts for me on this trip–letters from her granddaughters. Anna’s envelope says, “My forever favorite.” Jade is turning 15 this summer. She wrote on her envelope, “To the awesome Pastor Karen”! 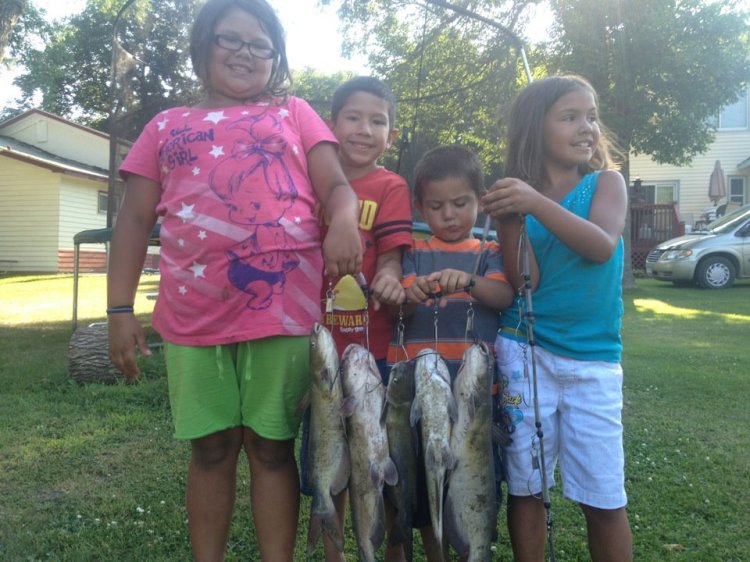 Here’s Jade (to the left) and Anna (far right) a couple of years ago. In between is their little brother, Jr., and a friend or a cousin, standing second from the left. They caught all these fish! They learned how to fish from Pat, who has a boat, and lives with Sharon on Lake Andrew. Pat loves all kinds of fishing, especially ice fishing!

“Hi Pastor Karen how are you doing I just wanted to say hi and tell you I really miss you. Guess what! I’m going to have a quinceneara! It’s a Mexican tradition where if a girl turns 15 they throw a big party! I get to wear a big, poofy dress. It’s going to be pink with sparkles all on the top and two strips going down the front. My quinceneara is going to be butterfly themed. If you still lived here, I would’ve loved to have you there. I’m in softball. My really favorite part is batting. I love holding that bat and putting all my might into it and hitting the ball over their heads. We also got another dog. His name is Koda show photo of Koda; he’s really energetic and playful. Grandpa is going to take me on a fishing trip! I’m so excited. I hope we catch lots of fish. I really really miss you Pastor Karen, so do Anna and Jr. Hope to see you soon, Pastor Karen. Goodbye. Love, Jade.”

I might get emotional if I read Anna’s letter aloud, too. So I will just share that one of my special memories of them is when I presided over the wedding of their parents, Augustine and Carrie, a couple of years ago.

The children participated in our hand bell choir and Sunday school, and they came and brought friends with them to our summer “Camp in a Van” program last July, which happened to fall on the week of my birthday. And guess what? Carrie and Tin and the kids surprised me with a big ice cream cake.

Everyone knew I loved ice cream because I used to send the children DQ gift certificates on their birthdays. I would say, “You can’t have a birthday without ice cream!”

While I read Jade and Anna’s letters, other happy memories came to mind. I was reminded of the relationships that blossomed and grew in that rural community of faith while I ministered there. And I felt strengthened to continue in my labor of love here. I am so blessed and honored to be a child of God, loved by God, forgiven by faith in Jesus Christ.

Talking with Pat and Sharon and reading their granddaughter’s letters, I felt, once again, the Lord calling my name, saying, “Follow me!”

Our gospel reading in the final chapter of John today is a “reaffirmation of call” story. The risen Christ has already appeared to Mary Magdalene in the garden at the tomb and to the disciples on a number of occasions. Our reading follows “many other signs” that Jesus does in the presence of his disciples, John writes. In 20:22, Jesus breathes his Holy Spirit on them and urges them to go and spread the message of forgiveness. He has already appeared to Thomas, who had refused to believe until he could see and touch Jesus with his own eyes and hands.

Then the book seems to come to an end at 20:31, “But these are written so that you may come to believe that Jesus is the Messiah, the Son of God, and that through believing you may have life in his name.” And then we come to today’s reading–chapter 21, which scholars believe was added later, with the transition “after these things.” Jesus had already appeared to his disciples on numerous occasions (in chapter 20) to urge them to keep on with the ministry. But in 21:14, we discover a contradictory statement when we are told, “this was (only) the third time that Jesus revealed himself to the disciples after his resurrection from the dead.”

At the beginning of today’s passage, you get the feeling that the disciples are kind of lost. Seven of them are gathered at the Sea of Tiberias–in Galilee, once again. They are wondering, “What’ll we do now?” They have been ministering with Jesus, witnessing his miracles and sitting under his teaching for 3 years. But he died on a cross. And despite all the resurrection appearances, they go back to where their story with Jesus began–when Christ first called to them from the shore (in Matthew, Mark and Luke) and invited those who were already fishermen to be “fishers of men.”

Here, at the end of John, Peter announces, “I am going fishing.”

It’s striking that he says, “I”–and doesn’t invite the others! Fishing wasn’t the rod and reel kind we mostly do. It was hard physical labor, involving the dragging of nets from a small boat, working at night. Is he trying to get away from the others? What is happening to this group that Jesus had urged to be known by their love for one another–the group for which he had prayed would be ONE.

But then the other disciples say, “We will go with you.” So maybe it’s just Peter, feeling bad. Peter, after all, was the one who denied the Lord 3 times before the cock crowed on the night Jesus was arrested -just as Jesus said he would. Maybe Peter was feeling like a failure– or just weary from it all.

So… Seven men in a little boat. Fishing all night. Catching nothing. And then it’s daybreak and who’s on the beach? Jesus, but they don’t know it’s him, despite him calling them affectionately, “Children.” But they know it’s him-when?–after the miraculous catch following Jesus’ instructions to throw out the net, again, from a different side. When they know it is the Lord, Peter, the impulsive, passionate one, swims the 100 feet to shore, while the others bring in the little boat loaded down with (do you recall how many?) 153 fish!

Now we are having breakfast with Jesus–and it’s a potluck or “pitch in” as Carl says, because Jesus already had bread and fish cooking over a fire. Yet he says, “Bring some of the fish you caught just now.” Returning to God a portion of what the Lord had given them, sharing with one another. This breakfast is important because it proves that Jesus is a real, live human being and not just a ghost–‘cause ghosts don’t eat! This is important to John’s theology–that Jesus is fully human and fully God. This fellowship meal is also important because it shows the love of God– how Jesus hasn’t stopped caring about the disciples and that he is determined to use them for His Father’s salvation work, though every single one of them deserted him in the end!

I could tell you so much more –about the 2 different words John uses for love, when Jesus asks Peter if he loves him–and Peter answers with a different word for love, one that means friendship, not the more noble, reverential love word that Jesus uses. I can tell you about the 3 different words for fish in this passage.  I can tell you about the 2 different words for feed and sheep when Jesus urges Peter, if Peter loves him, to “Feed my lambs”( v. 15) “Tend my sheep” (v. 16) and “Feed my little sheep” (v. 17). But that’s not what I want you to remember from this passage. I want you to see that the miracle catch, the breakfast & appearance of the risen Christ—it’s all about relationship–with God and one another. And it’s about being obedient to the call to discipleship,  and hearing the call not just one time, but being strengthened and encouraged to persevere, day by day, moment by moment, in our callings–until Jesus Christ comes again.

And though persecution and suffering may come, as Jesus warns Peter in 21:18. “But when you grow old, you will stretch out your hands (crucifixion language), and someone else will fasten a belt around you and take you where you do not wish to go.”

I was inspired by Jesus’ breakfast with his disciples–to encourage them to keep on with the ministry–and be strengthened till the end, though there would be suffering in the road ahead. I decided to share this with our faithful staff on Thursday. We had a refreshing time of prayer and sharing. We had my favorite breakfast of all. Donuts! 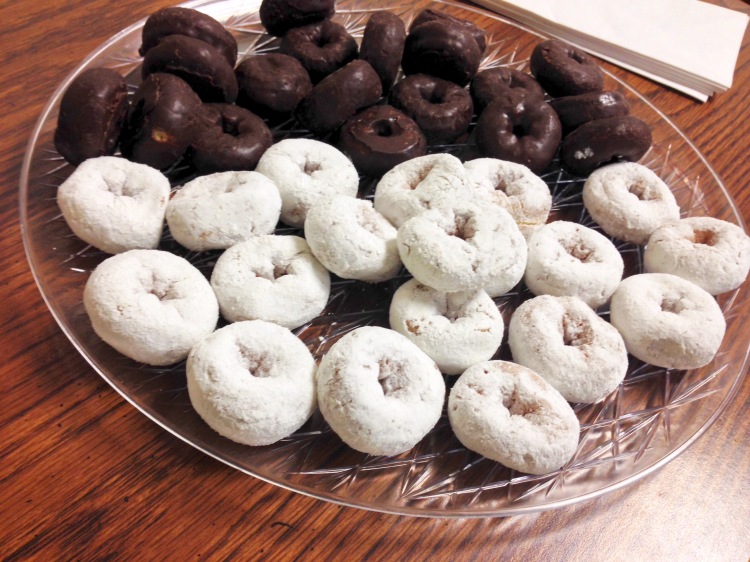 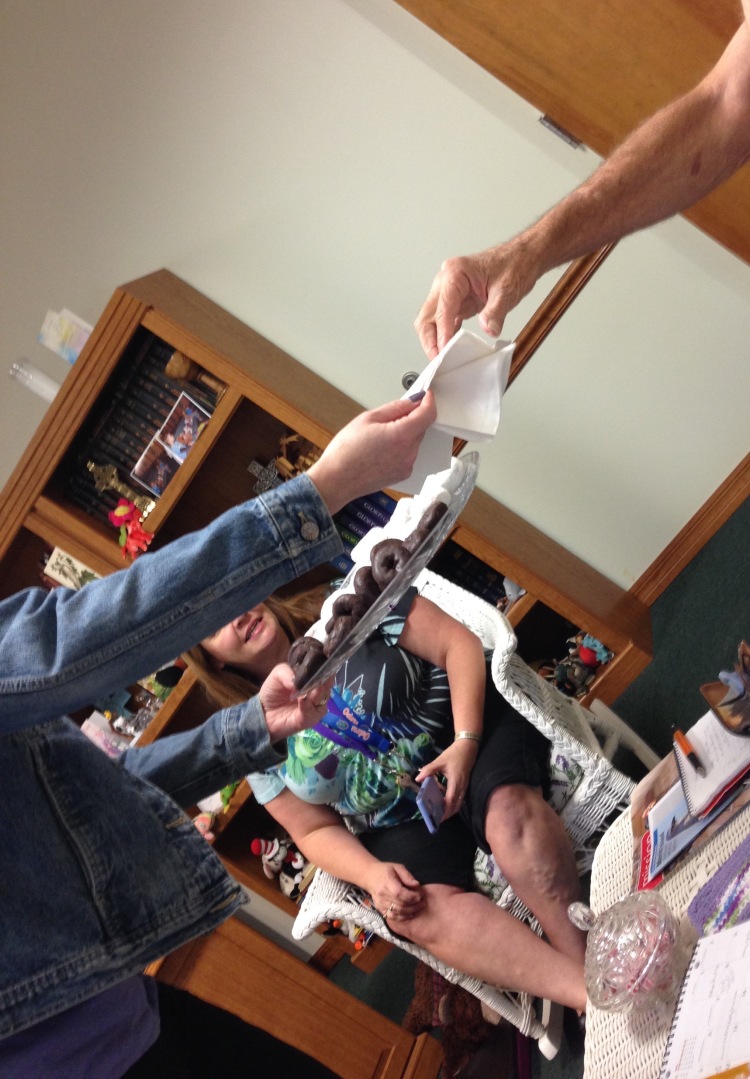 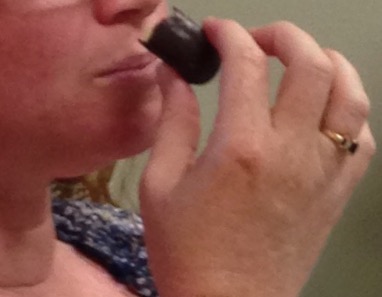 Friends, do you hear Jesus calling us? Do you hear him calling you?

Holy One, we thank you for opening our hearts to receive your Word –urging us to continue day by day, moment by moment, in the ministries to which you have called us. Thank you for your love, your patience, your grace that covers all our sins when we, like Peter, stumble and fall and our hearts or lives betray your command to love you more than anyone or anything. Help us, Lord, to encourage one another so that we persevere, despite the trials, sorrows and suffering that may lie ahead. Build up our faith for your miraculous provision as we seek to walk in your ways, reaching out to care for one another and people in need–feeding your sheep, tending your lambs. Strengthen us to follow you. In Christ we pray. Amen.