The Presbyterian Church of Coshocton

28 After he had said this, he went on ahead, going up to Jerusalem.

29 When he had come near Bethphage and Bethany, at the place called the Mount of Olives, he sent two of the disciples, 30 saying, “Go into the village ahead of you, and as you enter it you will find tied there a colt that has never been ridden. Untie it and bring it here. 31 If anyone asks you, ‘Why are you untying it?’ just say this, ‘The Lord needs it.’” 32 So those who were sent departed and found it as he had told them. 33 As they were untying the colt, its owners asked them, “Why are you untying the colt?” 34 They said, “The Lord needs it.” 35 Then they brought it to Jesus; and after throwing their cloaks on the colt, they set Jesus on it. 36 As he rode along, people kept spreading their cloaks on the road. 37 As he was now approaching the path down from the Mount of Olives, the whole multitude of the disciples began to praise God joyfully with a loud voice for all the deeds of power that they had seen, 38 saying,

“Blessed is the king
who comes in the name of the Lord!
Peace in heaven,
and glory in the highest heaven!”

39 Some of the Pharisees in the crowd said to him, “Teacher, order your disciples to stop.” 40 He answered, “I tell you, if these were silent, the stones would shout out.”

When I came to work in the church office on Tuesday, I discovered that I had a message from a member on my phone letting me know that another member had fallen and had been in the hospital. Then, she reminded me that callers to the pastor’s phone at church still heard Rev. Carlisle’s voice on the recorded greeting. She said, “I am glad you are here. And everyone I know is glad you are here. And we would like to hear your voice!”

That just made me smile! I had totally forgotten about changing the message on my voicemail at the church. So, I recorded a new message this week. But I have to tell you, it took me several tries to record my message. Every time I would play back my message, I would think, “Who is that little girl on the phone????” And then I thought, “Oh, my poor flock has to listen to a little girl’s voice every Sunday! I’m so sorry!”

I’ve never liked my voice. If only I had a different voice, you know, maybe like Morgan Freeman or James Earl Jones. I would like to be able to do a Darth Vader, “Luke, I am your father.”

It took me quite a few years to be persuaded that I should use my voice to preach—and only because I am convinced that God wants us to serve the Church with every gift the Lord has given us. Our voices are a gift from the Lord!

It took longer, though, to persuade me to sing in a choir. I never sang in any choirs before about 2 years ago and only because I wanted to support the new choir director at my church. The choir was small, so I thought maybe if people saw that I was singing in the choir, they might also want to join the choir!

And now I can say that it’s a beautiful experience when we join together, blending our unique voices, to sing God’s praise. Something healing happens to us as we sing; don’t you feel it, too? Sometimes, I can feel the joy and peace of the Spirit working among us, making us one, drawing us nearer to the Lord.

I wonder if that’s how the disciples are feeling on that day when Jesus, riding on a colt, approaches the path from the Mount of Olives to Jerusalem. 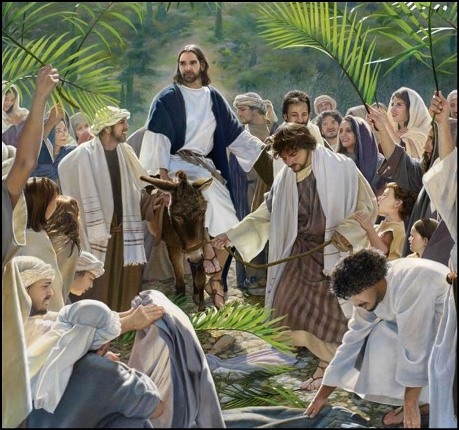 If you have your Bibles open to our passage in Luke 19, you’ll see several lines indented; this is a quote from Psalm 118, beginning at “Blessed is the king who comes in the name of the Lord!” If you flip back to the psalm, you will see that Luke has changed the original wording slightly from, “Blessed is the one who comes in the name of the Lord.” This is meant to be a royal procession as the disciples lay down their cloaks for Jesus to ride on.

But did you notice a couple things missing from our Palm Sunday scripture? There aren’t any palm branches in Luke’s account; but they are mentioned in Psalm 118, and in Matthew and Mark’s accounts of the triumphal entry into Jerusalem. And the people don’t cry out, “Hosanna!”—“Save us, now!” They do in Matthew 21 and Mark 11, but not in Luke.

And this gospel calls the animal Jesus is riding a “colt.” That can be a young donkey or a young horse. He doesn’t use the usual word for “donkey.” But  Christians for centuries have interpreted this passage to mean a young donkey, seeing our Savior’s ride into Jerusalem as the fulfillment of the OT prophecy of Zechariah 9:9: “Rejoice greatly, Daughter Zion! Shout, Daughter Jerusalem! See, your king comes to you, righteous and victorious, lowly and riding on a donkey, on a colt, the foal of a donkey.”

No doubt about it; singing in this jubilant procession is not just an act of worship; it is a political and subversive act; an act of protest and defiance against the Empire and its puppet leaders of the Jewish people. The disciples sing, “Blessed is the king!” They are bearing witness to Jesus and “all the deeds of power that they had seen.”

When the Pharisees say to Jesus, “Teacher, order your disciples to stop,” they may be afraid of retaliation from the local authorities or the Roman Empire. They may just be angry and offended by this show of support for the man from Galilee, the Nazarene. “I tell you, if these were silent,” Jesus tells the Pharisees, “the stones would shout out.”

He is not afraid, though he knows what is to come. He could have stayed out of the Holy City and quietly ministered in the villages and rural areas, without attracting too much attention, perhaps. But that’s not what he does. He remains obedient to the Father. He is in charge of all the details and turn of events on this day of the triumphal entry—saying to two of his disciples, “Go into the village …. and you will find tied there a colt that has never been ridden. Untie it and bring it here.” He tells them what to say if anyone asks why they are untying it. “Just say this,” he says, “The Lord needs it.”

As we watch in horror and helplessness, he turns his face to Jerusalem, knowing the cross looms ahead. We can imagine the disciples laying down their cloaks and singing with a loud voice, “Blessed is the king who comes in the name of the Lord!”  But we know they aren’t going to stand by him when they realize that the cost of discipleship, as Jesus taught in Luke 14:27, means picking up their crosses and following him.

Where will they be when Jesus is taken before Pontius Pilate, who is told by the Jewish assembly, “We found this man perverting our nation, forbidding us to pay taxes to the emperor, and saying that he himself is the Messiah, a king.” Will they be engulfed by the crowd that turns against Jesus, an innocent man, and demands that a murderer named Barabbas be set free?

Will they remember, at all, the day they sang his praises for all the wonderful deeds he had done?

“Blessed is the king!”

Holy One, you are our Savior, our Redeemer, our Lord! We cry out to you now, as the psalmist and the disciples did long ago, “Blessed is the King!” But we know how we can be weak and fearful. When we examine our hearts, we know that we wouldn’t be any different than your first disciples, that we would not have wanted to pick up a cross and suffer with you. Forgive us, Lord. Thank you for doing that suffering work on the cross for our sakes—and for your love, mercy and compassion for all sinners today. Help us to be strong and brave, Lord, and rely on your Spirit that lives within us as we continue to walk this Lenten journey to the cross. Speak through the voices that you have given us. Give us confidence and boldness. Lead us to serve you all of our days and sing songs of loud and joyful praise, with one voice, for the wonderful deeds you have done. In Christ we pray. Amen.

I am the pastor of First Presbyterian Church of Smithtown, New York on Long Island. Come and visit! We want to share God’s love and grace with you and encourage you on your journey of faith. I have served Presbyterian congregations in Minnesota, Florida and Ohio since my ordination in 2011. I am a 2010 graduate of Princeton Theological Seminary and am working on a doctor of ministry degree with Austin Presbyterian Theological Seminary. I am married to Jim and we have 5 grown children and two grandchildren in our blended family. We are parents to fur babies, Liam, an orange tabby cat, and Rory, a standard poodle. View more posts