Six days later, Jesus took with him Peter and James and his brother John and led them up a high mountain, by themselves. 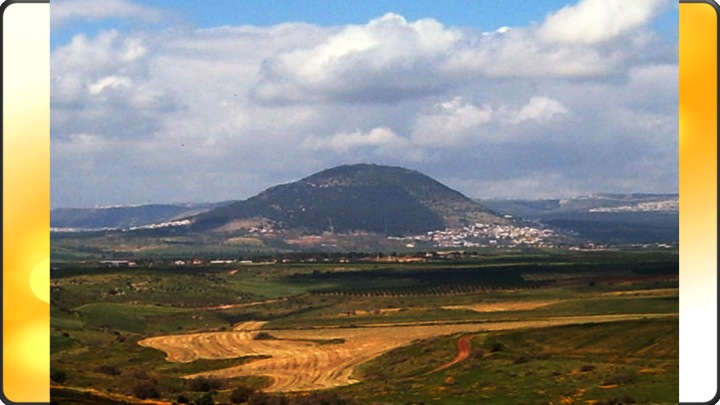 2And he was transfigured before them, and his face shone like the sun, and his clothes became dazzling white. 3Suddenly there appeared to them Moses and Elijah, talking with him.  4Then Peter said to Jesus, ‘Lord, it is good for us to be here; if you wish, I will make three dwellings here, one for you, one for Moses, and one for Elijah.’ 5While he was still speaking, suddenly a bright cloud overshadowed them, and from the cloud a voice said, ‘This is my Son, the Beloved; with him I am well pleased; listen to him!’ 6When the disciples heard this, they fell to the ground and were overcome by fear. 7But Jesus came and touched them, saying, ‘Get up and do not be afraid.’ 8And when they looked up, they saw no one except Jesus himself alone. 9 As they were coming down the mountain, Jesus ordered them, ‘Tell no one about the vision until after the Son of Man has been raised from the dead.’

I was mostly on my own this week, taking care of our two high maintenance dogs and a slightly spoiled cat. Jim was away in Boston, visiting our granddaughter, Jessie, son, Daniel, and daughter-in- law Hiu-fai. Jim also spent two emotional days in New York, visiting his brother-in-law, Chuck, hospitalized with pneumonia and a hip broken beyond repair, and his sister, Mary, who suffers from dementia and was recently moved to a memory care wing of an assisted living center. In addition to his concern about Chuck and Mary’s health, Jim was worried that I wouldn’t take good care of our Pomeranian and Sheltie! He kept asking me, “How are the dogs??” But he never once asked about the cat! Probably because Melvyn always manages to make his needs and desires known–and persuade someone to feed him, pet him, or let him sleep in their lap. To help reassure Jim that everything was OK, I texted him photos each day. They helped him feel more connected to what was going on at home. Seeing, like the old saying goes, is believing. 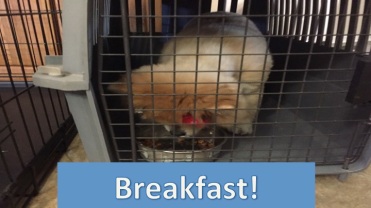 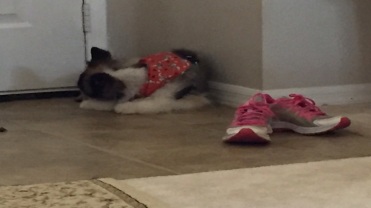 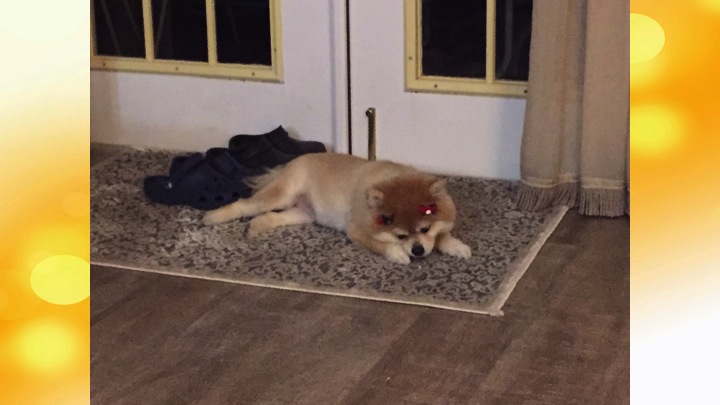 Jim also sent me texts and photos so I could feel more connected to him and what was happening with the family. I felt badly about not being able to go with him to see Chuck and Mary. And I felt badly about missing an opportunity to see Danny, Hiu-fai and little Jessie, who at 3, seems to be changing every day. 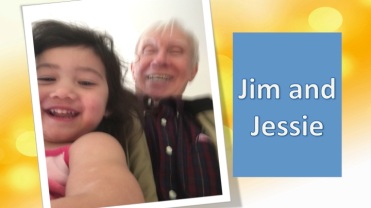 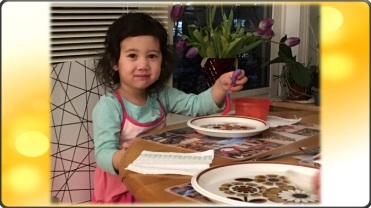 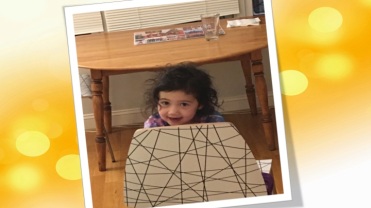 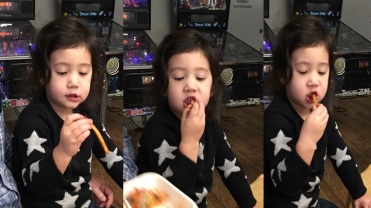 When it wasn’t enough to see photos and read texts and we had time, we talked on the phone. I put Jim on speakerphone so Mabel the Pomeranian could hear his voice and he could hear her shrill barking when she wanted to get in my lap or when she wanted me to keep on petting her–and never stop! 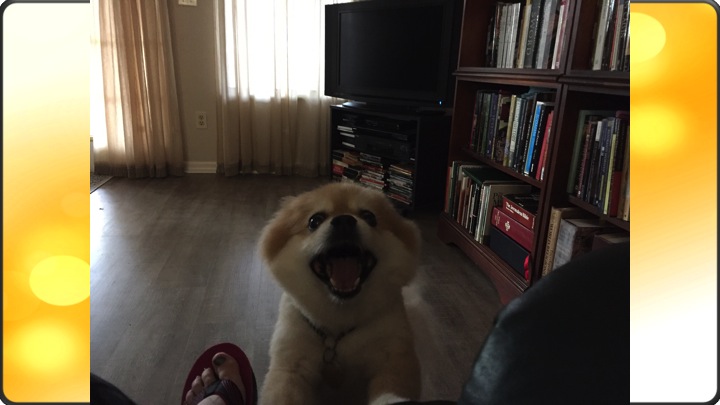 We are comforted to see and hear the ones we love, though I did long to touch them, too. I kept saying, “Tell Jessie I love her and give her a big hug!” And then, yesterday, Jim surprised me by texting me a recording Jessie’s voice, so I could hear her and feel closer still.

We encounter the familiar story of the Transfiguration — the metamorphosis–of our Lord in our gospel lesson in Matthew 17 today. The Transfiguration, which appears in 3 of our gospels, reveals Christ’s true identity in a vision shared by 3 disciples on a mountaintop. Important aspects of this passage disclosing his identity include the change in Jesus’ appearance– his face shining “like the sun” and his clothing a “dazzling white”, recalling other biblical descriptions of heavenly beings who appear among humans. Another key aspect is his association with Moses and Elijah — representing the “Law” and the “Prophets” and demonstrating his messianic role. And, finally, the voice from heaven–presumably the voice of God. This is the third time we have heard this proclamation in Matthew’s gospel so far. The first is at 3:17, at Jesus’ baptism in the Jordan. The second is in chapter 16–6 days before the Transfiguration. They are at Caesarea Philippi and Jesus asks Peter, “Who do you say that I am?” Peter says, “You are the Messiah, the Son of the living God.”

Jesus responds by saying that Peter is blessed. “And I tell you, you are Peter,” Jesus says, referring to the Greek name that Jesus gave Simon when he called him to be his disciple; Peter (Petros) means “stone” or “rock.” “And on this rock I will build my church,” Jesus says. But then he foretells his death and resurrection and Peter rebukes Jesus, saying, “God forbid it, Lord! This must never happen to you.” Jesus “turns” on Peter, then, and says, “Get behind me, Satan! You are a stumbling block to me, for you are setting your mind not on divine things but on human things.” Then he foretells the disciples’ suffering and persecution. “If any want to become my followers,” he says, “let them deny themselves and take up their cross and follow me.” 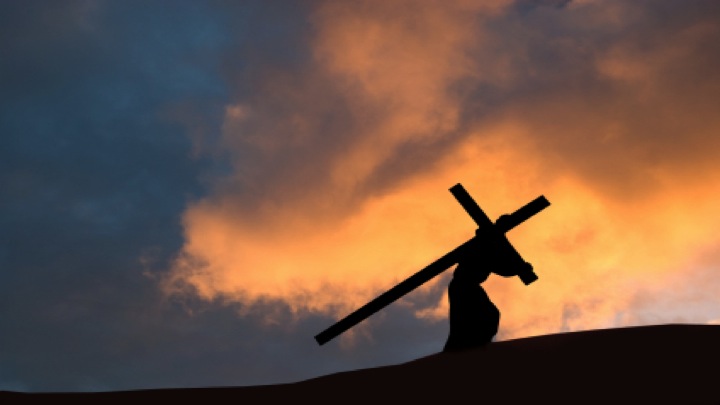 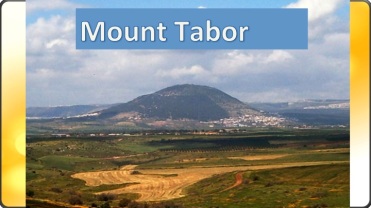 As I read this passage, Peter’s response to seeing Jesus transfigured and speaking with Elijah and Moses stands out to me. He says, “Lord, it is good for us to be here; (“It’s a good thing we’re here to help you, Jesus!) If you wish, I will make three dwellings (or shelters or booths) here, one for you, one for Moses, and one for Elijah.”

Peter sounds like us! He wants to do the right things. But he only knows to do what he has already done before. He can’t imagine what is to come–just as we have no idea what the future holds and why things happen as they do. We can only trust that God has planned for us a future with hope, and will guide us in His will.

Peter’s response is firmly rooted in everyday life. He is practical, pragmatic. If Jesus, Moses and Elijah are going to have a meeting on top of a mountain, they will need shelter from the heat of the sun, probably made with branches and leaves, like those regularly made for the Feast of the Tabernacles. But why would three heavenly beings need “dwellings” or “shelters?” They wouldn’t. Peter is making a mistake similar to the one he made 6 days earlier, when Jesus rebukes him for being a stumbling block to him. “You are setting your mind not on divine things, but human things,” I hear Jesus say, again.

But I am also moved by Jesus’ grace for Petros, his “rock.” He isn’t rebuked this time for not understanding what God has planned for the salvation of the world. This vision, which involves all of the senses, is an unforgettable event; it will stay with Peter for the rest of his life. How could he ever doubt when he saw with his own eyes, heard with his own ears, and had the vision confirmed by two other close friends? 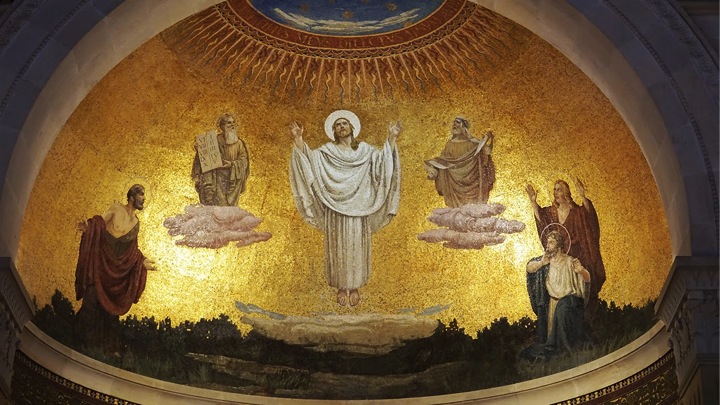 Reading this passage in the context of God’s love, mercy and grace, I am reassured that God–who created human beings, gave us an earthly life to live, and offers us the gift of eternity with Him, understands our limitations. God knows how we long for the concrete–to see with our own eyes, to hear God’s voice, to be touched by His love and feel His comforting presence with us, especially when we are feeling anxious and afraid.

Friends, we have been to the mountaintop with Jesus and His disciples! We have heard God’s voice declaring Jesus His Son, His Beloved. And we have seen His glory. Live each day with the confidence that the God who came to us as one of us still desires to be with us and use us for His loving purposes. “Who do you say that I am?” I hear Jesus ask, again, as he does in Matthew 16:15. And I hear a God who wants to be known–a God who was willing to suffer and die on a cross so we would be forgiven from our sins–and need never fear or feel ashamed again. Remember God’s grace and mercy for you — just as God had grace and mercy for Peter. Petros, the Rock, came to be a strong leader of the Church. But as Jesus’ disciple, he often got things wrong.

Our God desires that we draw nearer to Him in prayer, listen–really listen– to His Word, and consider what it means for us today. We shouldn’t make the same mistake that Peter made–thinking God would want him to do what he has always done, because it is what he knows how to do and likes doing. Heavenly beings don’t need shelters or dwellings on a mountaintop! 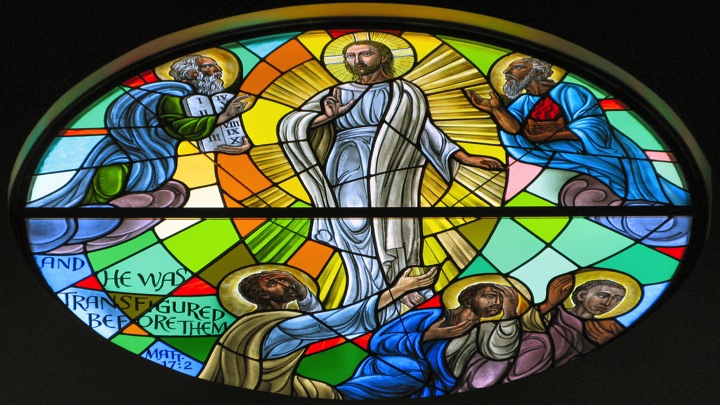 Jesus comes to the 3 disciples–the ones he chose to be his leaders– as they tremble and shake. He touches them, compassionately, like when he touches and heals the sick, lame, deaf, blind and those possessed by demons. “Get up,” he says, and I imagine his voice is gentle. “Don’t be afraid.” They look up and are relieved to find that they are alone with him, once again. Christ tells them to share what they have seen and heard and now know to be true. But not until this thing that God has called Jesus to do has taken place–and the Son of Man has been raised from the dead.

Years later, Peter says nothing about his fear or misunderstanding on the mountaintop with Jesus and two other disciples when he recalls what happened that day. He writes in 2 Peter 1:16-18 to persuade us of the promise of Christ’s Second Coming. He writes as a man transformed by experiencing God’s glory with his own eyes and ears. “For we did not follow cleverly devised myths when we made known to you the power and coming of our Lord Jesus Christ, but we had been eyewitnesses of his majesty.  17 For he received honor and glory from God the Father when that voice was conveyed to him by the Majestic Glory, saying, “This is my Son, my Beloved, with whom I am well pleased.”  18 We ourselves heard this voice come from heaven, while we were with him on the holy mountain.”

Holy One, we thank you for Jesus, your Son, the Beloved, whom you sent to suffer and die for our sins so that we may live as a forgiven people. Help us to hear your voice and really listen–obeying your Word every day. Stir our hearts to love and compassion, showing mercy for people in need, just as Jesus was never afraid or reluctant to reach out and touch those who were sick, poor, grieving, or otherwise needy. Thank you, God, for the gift of this life and that we are blessed by families and friends. We ask that you be with Mary, Jim’s sister, losing her husband of so many years yesterday morning. Welcome Chuck into your heavenly home. Comfort Mary, her children, and grandchildren in their grief. Bring her new friends and more people she can love and be loved by. Remind her of your love. Thank you for knowing our limitations and using us for your glorious purposes in spite of our weaknesses. In Christ’s name we pray. Amen.