Very truly, I tell you, anyone who does not enter the sheepfold by the gate but climbs in by another way is a thief and a bandit. 2The one who enters by the gate is the shepherd of the sheep.  3The gatekeeper opens the gate for him, and the sheep hear his voice. He calls his own sheep by name and leads them out.  4When he has brought out all his own, he goes ahead of them, and the sheep follow him because they know his voice. 5They will not follow a stranger, but they will run from him because they do not know the voice of strangers.’ 6Jesus used this figure of speech with them, but they did not understand what he was saying to them. 7 So again Jesus said to them, ‘Very truly, I tell you, I am the gate for the sheep.  8All who came before me are thieves and bandits; but the sheep did not listen to them.  9I am the gate. Whoever enters by me will be saved, and will come in and go out and find pasture. 10The thief comes only to steal and kill and destroy. I came that they may have life, and have it abundantly.

While telling jokes about the Gorton fisherman catching fish of a nice, uniform, rectangular shape, David dresses his son, Jack, into a long yellow raincoat and matching yellow hat. 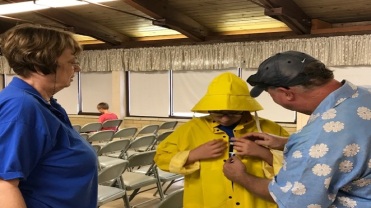 Junior and Senior Kids Klub shows continue this afternoon at 4. David is part of the Kids Klub family of volunteers, assisting Mary Lou by helping children learn their lines, use bigger voices, speak with expression, and understand theatrical lingo, such as “stage left.” The yellow hat has a wide brim–so wide, that it very nearly conceals Jack’s face.

“That won’t do,” Mary Lou will say later, rushing to the stage to fold back the brim. “Your mother will want to see your face!” she says, and laughs.

It’s easy to see Kids Klub in the biblical context of sheep and shepherds, especially this week, when there were many directions for little lambs to follow, with rehearsals Tuesday and Friday, and shows Saturday and Sunday. Many volunteer shepherds assist Mary Lou, the head shepherd. Every one of them has a role in working to strengthen and equip the children to minister to the community with the hope of the gospel, spoken and sung. One volunteer shepherd–Jennifer–taught the children to sing songs such as “Special in God’s Eyes” and “Heroes in Disguise.” This is Elly, Jennifer’s daughter, with her mom. 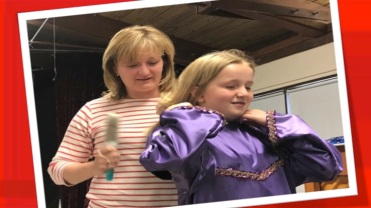 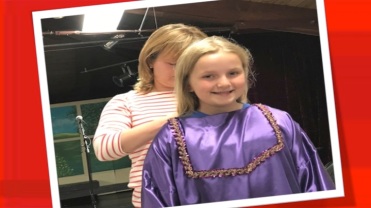 Still another volunteer shepherd is Pam, who wears a number of important hats, including choreographer and snack chair. Pam’s seat during rehearsals and shows is on a cushion at Mary Lou’s feet in front of the stage.

Pam teaches the children all the moves. She signals every cartwheel and footstep.… 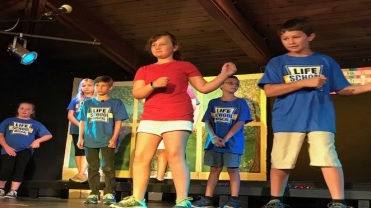 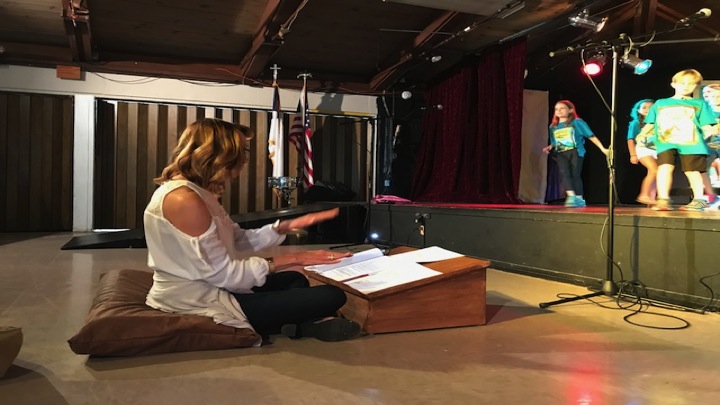 She directs every spin, twirl , and dancer’s pose . 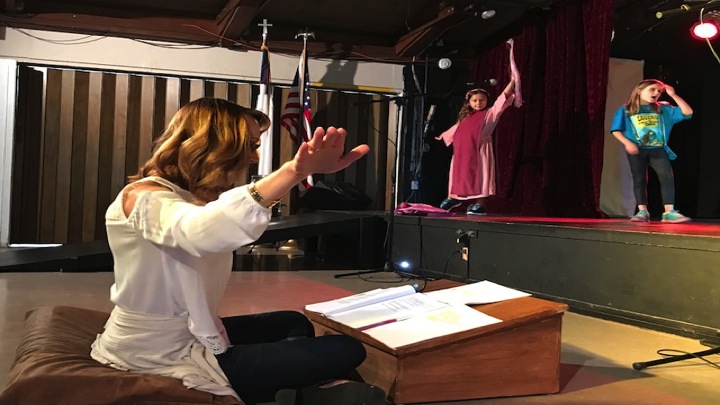 For the shepherds at Kids Klub, it’s all about the sheep. But the shepherds can only guide the sheep to do what the children are able to do–and what they are willing to do. But motivation isn’t usually a problem. Children who participate in the program, for the most part, want to be there. And if there is too much talking or movement, Mary Lou calls out, “Kids Klub, howdee!” Everyone freezes, gets quiet and listens. They know her voice– and they know her. They trust her and want to please her. Mary Lou knows their names–and which kids belong to which families. She knows their personalities and their abilities, their strengths and weaknesses.

So I was surprised some weeks back when I learned that the senior Kids Klub was having trouble. The older children hadn’t learned their lines. They didn’t know their songs! Some of them have been in the program for years. They are smart and talented and usually cooperative. Were they too comfortable, too confident? They were looking around, watching other kids on stage, instead of keeping their eyes on Mary Lou and Pam. Some were talking to each other and not listening for the voices of their shepherds–and following only them.

Jesus tells a parable about a shepherd and some sheep in our gospel reading today. But it isn’t the, “I am the good shepherd” passage. Not yet! That doesn’t begin until John 10:11. And though we are tempted to jump ahead, these first 10 verses of the chapter are connected to the preceding chapter. We know this because the verse opens with, “Amen, amen,” translated, “Very truly.” Double “amen’s,” aren’t used to introduce a fresh topic, scholars say. We encounter double amen’s again in verse 7 of this passage! Jesus is really trying to make his point–to explain what the Pharisees have, up to now, not understood.

So, we return to chapter 9 and recall how Jesus heals a man born blind. The man comes to believe in Jesus, but the Pharisees are angry and say Jesus cannot be from God because he healed on the Sabbath. They are angrier, still, when Jesus says that he came into the world “for judgment so that those who do not see may see and those who do see may become blind.” The Pharisees realize Jesus is talking about them–that they who want to exclude the blind man Jesus has healed from their community are the ones who are blind and whose “sin remains.”

Then Jesus tells the Pharisees a story from every day life–the parable of a shepherd and some sheep– to persuade them of their error–and to lead all who will hear this Scripture for generations to come to trust in Him whom God sent for love, as John 3:16 says, and so that they might not perish, but have everlasting life.

Sheep in Jesus’ time are a valuable commodity—and many people own sheep and goats. The wool is used for clothing and blankets; sheepskin has a variety of uses, including holding water or wine; and the people drink sheep’s milk and eat sheep’s milk cheese and lamb. When the Pharisees hear this story, you may be surprised that they are probably not imagining sheep to be dumb–as some of today’s farmers in the U.S. often say. Sheep are dependent on a human caretaker; that is true. They cannot just be allowed to roam free; they are prone to wander, stumble and fall or get eaten by wild animals. They need to be led to pasture–nourishment–and water. But they are also gentle and social animals, preferring to remain in the flock. And they aren’t dumb. The part about the sheep recognizing and obeying the voice of the shepherd, who calls them a by name (or a nickname) is true, even with the average flock containing about 100 sheep.

But although we might have a warm feeling when we think of shepherds, the elite Pharisees and other urban dwellers of Jesus’ time despise shepherds as a group. They are members of the lowest classes and social outcasts. They have a reputation (perhaps unfairly) for being rough, unscrupulous characters that pasture their animals on other people’s land and steal wool, milk and kids from the flock. This is in spite of all the OT shepherd and sheep imagery revealing God’s intimacy with His people, such as Isaiah 40:11, “He tends his flock like a shepherd: He gathers the lambs in his arms and carries them close to his heart; he gently leads those that have young.” And Ezekiel 34:12-16, that begins, “ As a shepherd looks after his scattered flock when he is with them, so will I look after my sheep. I will rescue them from all the places where they were scattered on a day of clouds and darkness…”

When Jesus speaks of thieves and bandits, though, the Pharisees are nodding their heads. Sheep stealing is so common back then that to protect the sheep, shepherds sleep with them, often at the entrance to the stone enclosure. 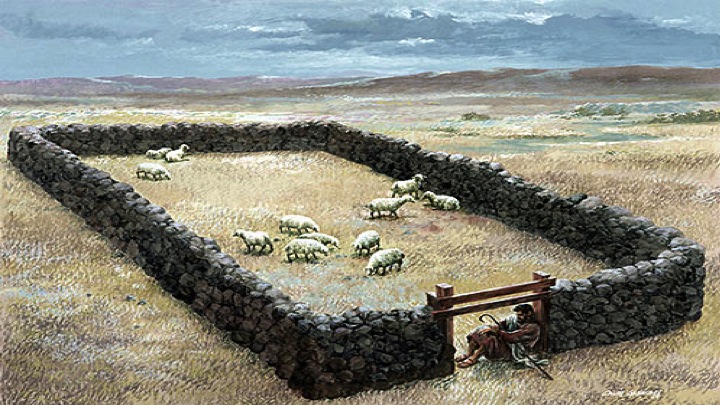 So when Jesus says, “I am the gate for the sheep,” think of his protection and his provision, as we read on, “Whoever enters by me will be saved, and will come in and go out and find pasture.” This is in sharp contrast to the thief who comes only to “steal and kill and destroy.”

Jesus has come so that we–His sheep–may have life and have it abundantly.

And abundantly we do live–when we listen for God’s voice and seek to obey, trusting the one who loves and cares for us like no other. The one who calls us affectionately by name and protects us from the evil one. Let us never become too comfortable or over-confident so that we stop listening–and take our eyes off our loving Shepherd. For we are like sheep, prone to wander, stumble and fall. We need the Lord to lead us on right paths and nourish us by His Word and Spirit.

If we are looking for a lesson in obedience–a modern day parable of sheep and shepherds from our every day life–then we may go no further than Kids Klub. Both the junior and senior Kids Klub shows were wonderful yesterday, thanks to the loving, patient guidance of the shepherds–and sheep that listened for and heard their shepherds’ voices, trusted and obeyed.

And I was given the best job of all. Mary Lou had me sit close to the stage, below a 5-year-old boy performing in his first ever show.

I was to motion him to the microphone–which is taller than he is–when it’s time for him to say his one line that comes up quickly in the first scene. After a girl says, “no more standing in line at the barfeteria” and another says, “Ewwww! Disgusting! Gross!!” Isaac says, “And no more Mystery-meat Monday…”

He waited till the room was quiet before delivering his line perfectly. The audience hung on his every word, before bursting into laughter.

But when I motioned him to the microphone to sing with 3 others, I was so proud I almost cried when his voice soared above them all: 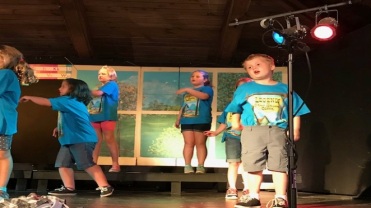 Holy One, we thank you for leading us in the paths that you want us to go. Thank you for the work you are doing in us–for transforming us, day by day, into people you can use to build your kingdom, here on earth. Thank you for the gift of abundant life through belief on your Son and for the promise that we will not perish, but live eternally with You. Help us to trust you every day, to listen for your voice, and to obey. Strengthen our faith. Bless those who labor for the children and young families. Give them energy, creativity, and joy. And bless the children, Lord, fill them with spiritual gifts as they seek to minister together, reaching out to our community, sharing the hope of our Good Shepherd, through Your Word and songs of praise. In Christ we pray. Amen.