1 See what love the Father has given us, that we should be called children of God; and that is what we are. The reason the world does not know us is that it did not know him.  2 Beloved, we are God’s children now; what we will be has not yet been revealed. What we do know is this: when he is revealed, we will be like him, for we will see him as he is. 3 And all who have this hope in him purify themselves, just as he is pure.

Nicholas Winton was a 29-year-old stockbroker in London , preparing for a ski vacation in Dec. 1938, when he got a call from his friend, Martin Blake. Would he come, instead, to Prague and help him assist refugees? Blake was an associate of the British Committee for Refugees from Czechoslovakia. The committee was established in October 1938 to provide assistance for refugees created by the German annexation of the Sudetenland.

Winton was born in 1909 to parents of German Jewish ancestry who had moved to West Hampstead, England. They converted to Christianity and had Winton baptized in the Anglican Church as an infant. Winton wasn’t a particularly religious or altruistic person back then; he earned a good living as a stockbroker. He was a bachelor who loved to sail, ski, and travel. He was a champion fencer who hoped to compete in the next Olympics; then they were canceled because of war.

Here is a photo of Winton with his brother and sister: 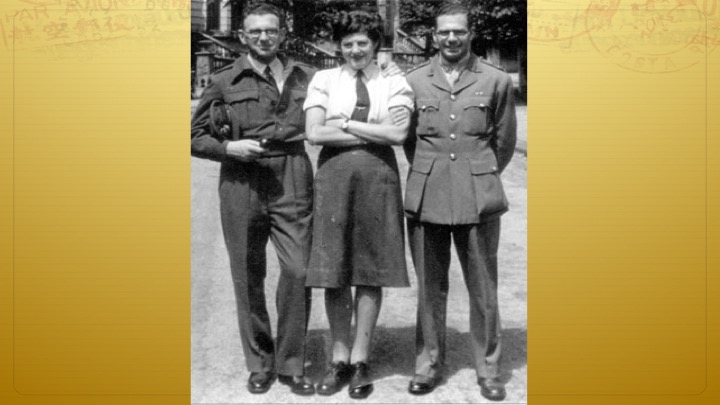 But he did give up his vacation to go to Prague to visit his friend. He went to the refugee camps, filled to capacity with Jews and political opponents of Hitler. It was winter–frigid and snowy.  Conditions were horrible. Refugees huddled in makeshift tents, with nowhere else to go. Winton saw a map that shook him up; it showed the Germans’ ambition to take over the whole of Europe.

Jewish people living in Prague heard about Winton, the English friend of Blake’s, and the British Committee for Refugees in Czechoslovakia. They started knocking at his hotel room door, pleading for help. Winton decided that he could at least try and save the children. His motto was “If it isn’t blatantly impossible, there must be a way of doing it.”

He wrote letters all over the world, asking for safe haven for the children. He wrote to President Roosevelt, but received a reply from an embassy official: “the United States government … is unable to permit immigration in excess of existing immigration laws.” That didn’t stop Winton from taking applications for thousands of children. Finally, Sweden said yes to 25 children, who flew with a Swedish spy posing as a member of the Red Cross. Then Winton got a call from his boss, demanding that he return to his stockbroker job in England. He was a “money chap, not a humanitarian,” Winton would say many years later. “He had bags of money and all he thought about was money.”

Winton defied his boss and continued his work for the refugees. England would eventually say yes, so he returned to London to find foster families for each child so they could come into the country. He would also need to provide a guarantor of 50 pounds for every child. He wrote more letters to families on unauthorized stationery printed with  “The British Committee for Refugees from Czechoslovakia, Children’s Section” and named himself “Honorary Secretary.” He sent cards with photos of children from which parents could choose the one they wanted. His plan worked.

He found British families for 669 children. Most of their parents would later die in concentration camps. 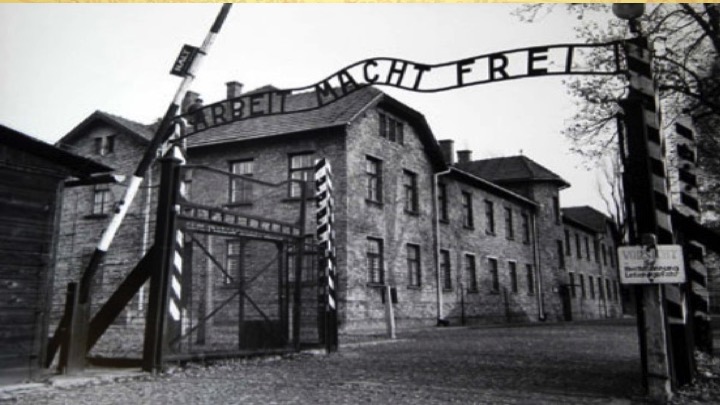 Another 250 children, scheduled to leave Prague by train on September 1, 1939, were unable to depart. Hitler had invaded Poland and the Second World War had begun. All but 2 of the 250 children would die.

It troubled Winton that he was not able to save all of the children whose parents had come to him for help. He would have been able to help at least 2,000 more, he said, if only the U.S. had allowed them to come.  This is the White House in Dec. 1938.

They weren’t his children. They were strangers. But their lives were valuable. They shared the same Creator. They were children of God.

As we are children of God, the writer of I John tells us. We are not only children, but “little children,” he says affectionately. Today’s passage begins with an exclamation of joy for the amazing gift from God. “See what love the Father has given us, that we should be called children of God; and that is what we are.” With this gift, is the expression of God’s love. God’s love makes us his children. We are chosen by God to receive his love, to be God’s “beloved” as we read in 1:7, 4:1, 7 and 11. But we can also interpret this to mean the gift itself is God’s love so that we may “abide in him” (2:28) and love as Jesus loved, striving “to walk just as he walked” (2:5). First John commands us to love one another and to love, as 3:18 says, “not in word or speech, but in truth and action.”

This early Christian community to which the author of 1 John writes is experiencing persecution, the cause of which is that the world doesn’t know Jesus. (1 John 3:1). The letter also speaks against false teachers who claim to have a special fellowship and knowledge of God. They believe they are sinless, addressed in 1:8: “If we claim to be without sin, we deceive ourselves and the truth is not in us.” They don’t believe Jesus is the Christ or the Son of God (2:22; 5:1, 5) or that Christ has come in the flesh (4:2). Christ’s death has no significance for them. For if they believe they are without sin, they also believe they have no need for God’s forgiveness or Christ’s atonement for sin.

First John offers a challenge to the “children of God.” Are we bearing the fruits of righteousness? “Children of God” do not conform to “the world.” They seek to imitate the Lord, choosing to do what is loving, what is right. What a huge, moral challenge this is for us–to do the right and loving thing in a world that scorns sacrifice, generosity and humility. But Christ urges us to imitate God’s mercy. He says in Luke 6:35-36: “But love your enemies, and do good, and lend, expecting nothing in return; and your reward will be great, and you will be children of the Most High; for He Himself is kind to ungrateful and evil men. Be merciful, just as your Father is merciful.”

First John promises our transformation into Christ’s likeness but also that we are already changed and changing. Our transformation will be complete when Christ returns for His Church. First John 3:2 says, “Beloved, we are God’s children now; what we will be has not yet been revealed. What we do know is this: when he is revealed, we will be like him, for we will see him as he is.”

Jim and I watched, “Nicky’s Family,” this week; the documentary was made by one of the 669 children that Winton rescued.

It wasn’t until about 50 years after the war that some of the surviving children learned about Winton and how they managed to escape. Winton didn’t even tell his wife the full story until one day, in the 1980s, when she found a scrapbook in their attic with all the children’s names and photos and newspaper clippings from the time.

Winton’s answer to his wife’s questions was that we should forget the past–and keep looking to the future, seeking to do good for others.

The scrapbook eventually made it into the hands of the producers of a BBC TV program, “That’s Life” in 1988. Winton didn’t know that the people surrounding him in the studio audience were among the children he had helped escape the Nazis in 1939. At one point in the program, the presenter asks, “Is there anyone in our audience tonight who owes their life to Nicholas Winton? If so, could you stand up please?” Dozens of people beside and in back of him stand. Winton turns in amazement and silently wipes away tears in both eyes.

Since then, hundreds of survivors have come forward to share their inspiring stories. Among the children he saved are filmmakers, poets, pediatric geneticists, physicists, journalists and authors, pastors and rabbis, mathematicians and a British Labour Party Politician and former member of Parliament. Nicky lived to see thousands of descendants of the children he saved. More than 370 survivors have never been traced. They still may not know the full story. 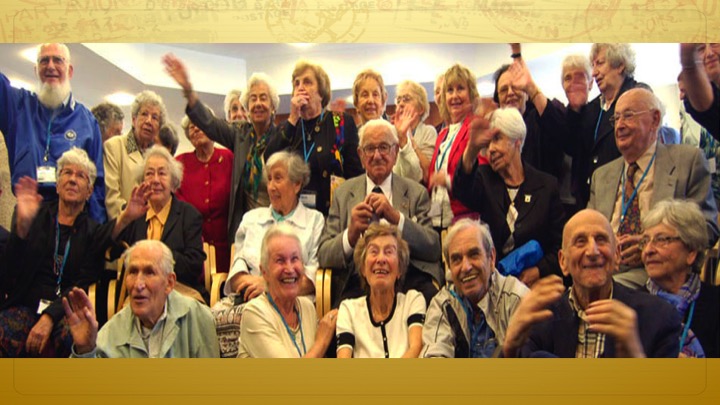 The documentary features Winton sharing his story with schoolchildren in his quiet, unassuming way, using self-deprecating humor. They listen intently and laugh at his jokes. Some will later be inspired to acts of love and kindness, shown at the end of the film. 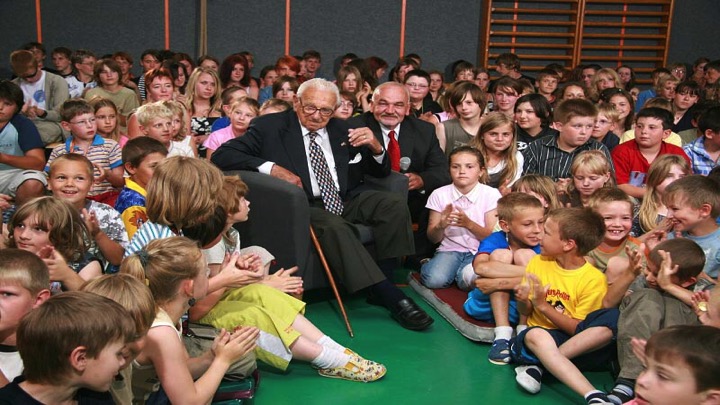 After the war, Winton worked for an international refugee organization and the International Bank for Reconstruction and Development in Paris. He got married, and he and his wife, Grete, raised 3 children.

Robin, their youngest, had Down Syndrome. He died from meningitis the day before his 6th birthday. This affected Winton greatly, so he founded an organization that helped  people with learning disabilities and their caregivers and families. He also established homes for the elderly in Britain. Later in life, the quiet, unassuming man received a great deal of attention because of his decision to forgo a skiing vacation and help Jewish children escape the Nazis. 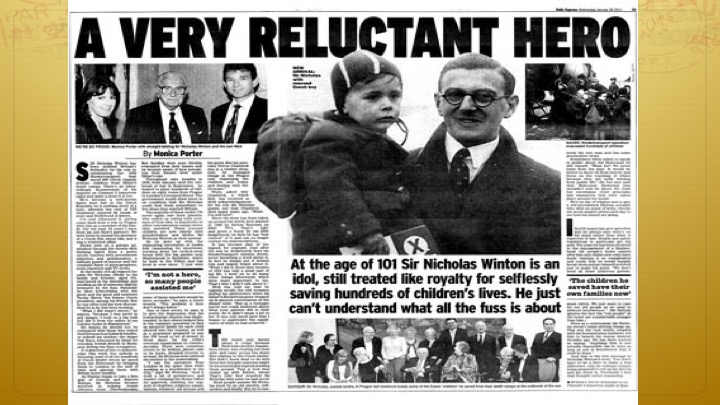 He received the order of the White Lion from the Czech government.

The Czech government also named an elementary school for him and nominated him for the 2008 Nobel Peace Prize.

Czech astronomers named a minor planet for him.  Statues of Winton and the rescued children stand in Liverpool Street Station in London where the Kindertransport children arrived.

Another statue of Winton stands in Maidenhead and at a railway station in Prague, commemorating the last Kindertransport train. 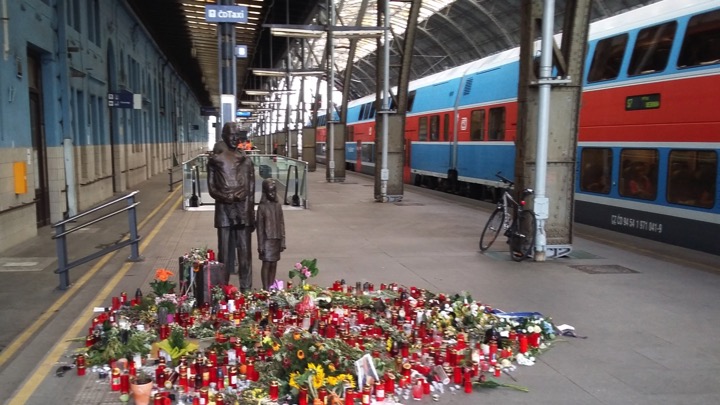 It troubled Winton to the end of his life that he was not able to rescue another 2,000 Jewish children whose parents sought his help.If only the U.S. and other nations had welcomed the strangers in need and had valued the life of every person.

As he always said, “If it is not blatantly impossible, there must be a way of doing it.”

For we share the same Creator. We are ALL children of God!

Holy One, we give thanks for all the saints who have served you throughout their lives, and set a good example for us. Thank you, Lord, for your mercy and forgiveness in Jesus Christ. Help us, Lord to always seek to do good, to do what is right and loving, even when others do not agree. Thank you for calling us your children, your beloved, and giving us your love so that we may share it. We look forward to that day when our transformation is complete–when what we will be is finally revealed, when we see you face to face. Guide us in your will until that day. Grant us vision to see the world through your eyes so that everyone to us is your precious child, someone you love. In Christ we pray. Amen.