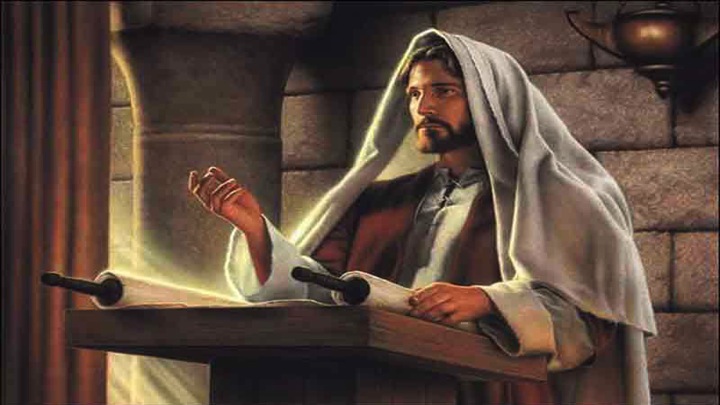 He left that place and came to his hometown, and his disciples followed him.  2 On the sabbath he began to teach in the synagogue, and many who heard him were astounded. They said,  “Where did this man get all this?  What is this wisdom that has been given to him?  What deeds of power are being done by his hands! 3  Is not this the carpenter, the son of Mary   and brother of James and Joses and Judas and Simon, and are not his sisters here with us?”  And they took offense at him. 4 Then Jesus said to them,  “Prophets are not without honor, except in their hometown, and among their own kin and in their own house.” 5 And he could do no deed of power there, except that he laid his hands on a few sick people and cured them.  6 And he was amazed at their unbelief. Then he went about among the villages teaching. 7 He called the twelve and began to send them out two by two, and gave them authority over the unclean spirits. 8 He ordered them to take nothing for their journey except a staff; no bread, no bag, no money in their belts 9  but to wear sandals and not to put on two tunics. 10 He said to them, “Wherever you enter a house, stay there until you leave the place.  11 If any place will not welcome you and they refuse to hear you, as you leave,  shake off the dust that is on your feet as a testimony against them.”  12 So they went out and proclaimed that all should repent.  13 They cast out many demons, and anointed with oil many who were sick and cured them. 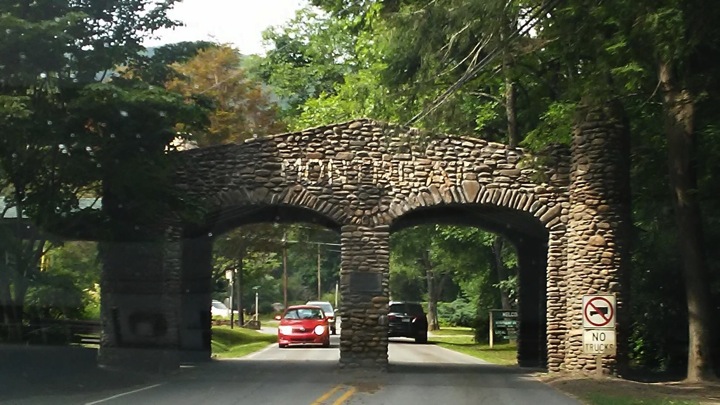 It was Monday, the first day Leslie, Chad and I were attending classes at the Montreat Music and Worship Conference. With the exception of our adult choir rehearsals twice a day, we attended different classes, tailored to our ministry gifts and callings. 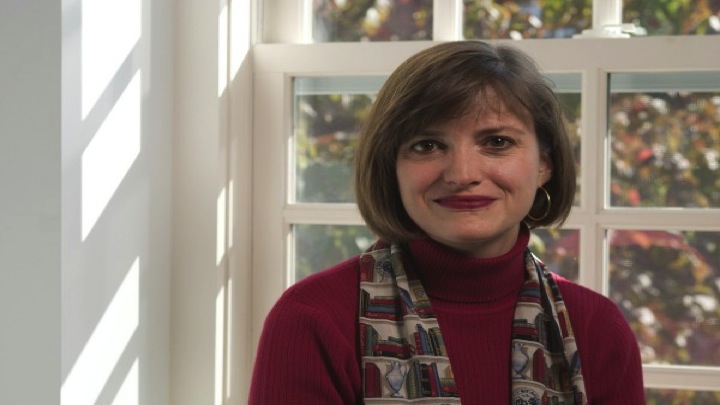 I felt a thrill of excitement when she described what we would be doing over the next 5 days. We would see and discuss Christian images from ancient times to present, in worship and other sacred spaces, particularly where the sacraments of Baptism and the Lord’s Supper were celebrated. “You might be wondering why we are doing this,” she said. “For a number of reasons. One, our culture is increasingly oriented to visual…. We are bombarded by images all the time. What are the images that shape us in our world?” And two, “for historical reasons, so we may learn how Christians have lived out and expressed their faith over the centuries.” Three, for theological reasons. We can consider what Christians believed and what we believe about the Lord’s Supper and Baptism. And four, because  “what we taste, smell, touch and see are all part of the way God communicates with us.”  “He accommodates to us,” she said, quoting 16th century church reformer John Calvin. God who created us and knew us before we were in our mother’s womb, knows how to speak to us at our level so that we can understand.

Ever notice how God has always used visual aids with his people? How did God first speak to Moses? A burning bush.

How did he speak to Abraham? He told him to look at the stars, promising that his descendants would be even more numerous.  And through the visitation by angels who looked like ordinary men. 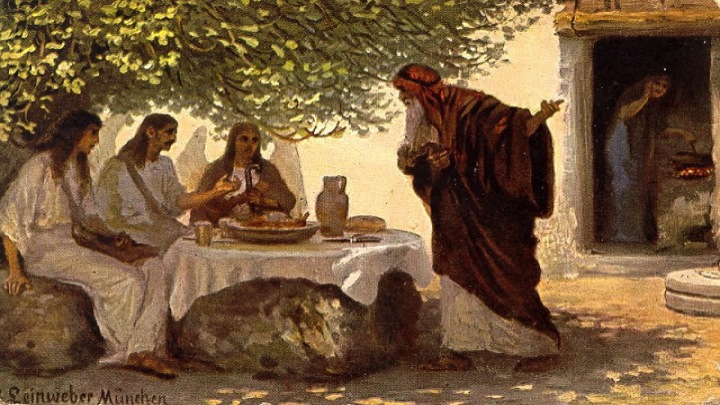 And God has come down to our level to reveal himself to us, sending his Son to be one of us, to live among us, and share our common lot.

Jesus taught through every day stories and objects. In Matthew 6:26, he says,  “Look at the birds of the air, for they neither sow nor reap nor gather into barns; yet your heavenly Father feeds them. Are you not of more value than they?”

In Matthew 6:28-29, he says, 8 “So why do you worry about clothing?  Consider the lilies of the field, how they grow: they neither toil nor spin; 29 and yet I say to you that even Solomon in all his glory was not arrayed like one of these.”

Our gospel reading in Mark today brings to mind an old English proverb,  “Familiarity breeds contempt.” What does that mean? I found this translation,  “If you know someone very well, you stop respecting them.” Ironically, when God speaks to His own children through His Son, some reject him because he is human.  He is one of them, but he is also different, preaching unlike the scribes and Pharisees, and healing and casting out demons with power and authority that others don’t have.

“Where did this man get all this?” the congregation murmurs to one another when he preaches in his hometown synagogue.  “What is this wisdom that has been given to him?  What deeds of power are being done by his hands!  And “Isn’t he the carpenter?” The Greek word is  tekton, with a more accurate modern-day translation:  “construction worker” or “laborer”– not as high status as we would afford skilled “carpenters” today. Jesus’s father isn’t mentioned–did you catch that? Jesus isn’t called the son of a tekton—carpenter or construction worker, like he is in Matthew 13 when he preaches in his hometown –and is rejected. Scholars say that his neighbors are using hostile language when they identify him as the “son of Mary,” rather than son of his father, the traditional way a son is identified. In Mark, where there is no story of Jesus’ virgin birth, this is a  “slur against his legitimacy.”

Mark doesn’t tell us what Jesus says in his message that offends his hometown. He does declare himself a prophet, saying,  “Prophets are not without honor, except in their hometown,  and among their own kin and in their own house.” Mark emphasizes their personal rejection of him, saying in verse 3,  “And they took offense at him.”

He has just returned to Jewish Galilee from the Gentile Decapolis in 5:21, performing many miracles. He has cast out demons from a Gentile man living in the tombs and has raised a little girl from the dead. He has healed a woman who has been suffering from hemorrhages for 12 years. She touches his clothes when Jesus is in crowd, believing she will be healed. Jesus tells her,  “Daughter, your faith has made you well; go in peace, and be healed of your disease.”

But in Nazareth, he can “do no deed of power” except to “lay his hands on a few sick people and heal them.” What is the reason given? They lack faith. Jesus says in vs. 6 that  he is  “amazed at their unbelief.”  It is Christ’s power and not the person’s faith that heals them, but without faith, Christ does not heal. This reminds me of Hebrews 11:6,  “Without faith, it is impossible to please God because anyone who comes to Him  must believe that He exists and that He rewards those who earnestly seek Him.”

The second half of this passage begins a new section; this is Christ’s response to his rejection. He sends out his 12 to minister in other towns and villages,  giving them his power and authority over evil, sickness and disease. He tells them to take no money or bread, because he wants them to trust in Him and rely on the kindness of strangers. Not everyone will welcome them, he warns. If they don’t, they are to shake the dust from their sandals as they leave. And journey on, bringing hope and healing to those with open hearts and homes– to those who have faith.

We examined more than 100 images over the 5 days in Martha’s class at Montreat. We began with the Early Church,  when Christianity was illegal and believers had to worship in secret in the catacombs, 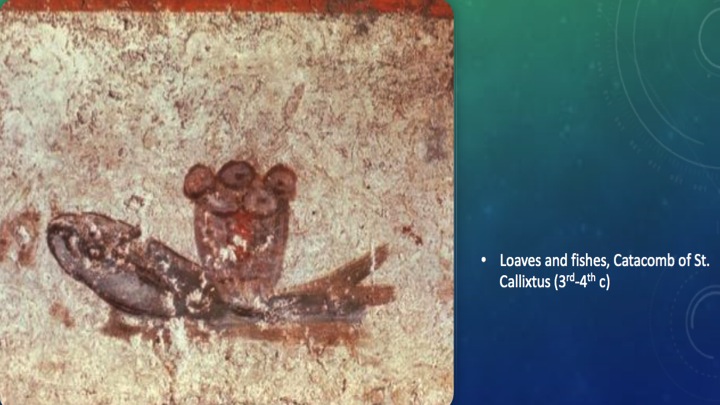 through the era of Constantine, when Christianity became the religion of the Empire, through the Middle Ages.

To the Renaissance and the Reformations to present day.

Martha was intrigued when I shared how we use images in worship to help us connect with the Word on a deeper level. Images draw us together as a faith community, gathered around our shared story and ministry. Images help those with open hearts and minds draw nearer to the Lord,  who longs to communicate with us right at our level, through all the senses he has given us.

He has given us His Spirit– equipping us with His power and authority– like he did his original 12 disciples. 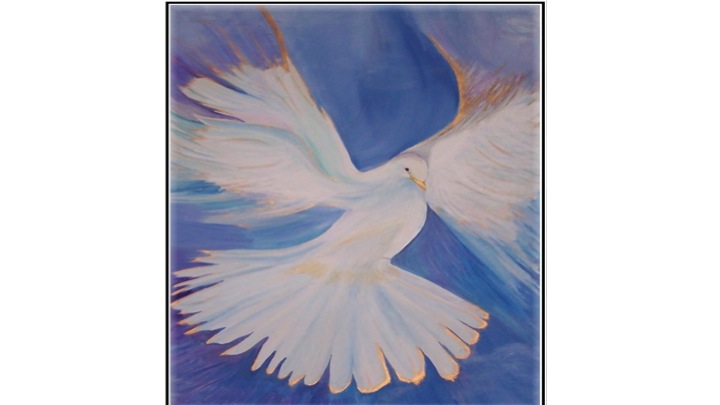 The Church is being sent out on a mission that he has ordained for us. And here’s the thing–the mission isn’t about us; and it won’t bring us material wealth or worldly measures of success. This passage assures us that we don’t need more stuff and we don’t need to be rich before we can serve him with our lives. In fact, money and stuff aren’t needed at all for the 12 disciples’ journey. They would get in the way from them relying completely on God to provide for them through the hospitality of strangers needing His healing touch.

Here’s the bad news. Not everyone will welcome you and accept your calling to be a light for Christ.  We will be rejected, sometimes, as he was, by people who are close to us. Our family and friends may amaze us, at times, for their lack of faith. And it will hurt our feelings, just as I am sure it hurt the Lord when his hometown rejected and ridiculed him. Don’t get stuck in discouragement or disappointment if that happens. Shake the dust from your sandals. Journey on, sisters and brothers. Don’t let anything stop you. Ask God to strengthen your faith, a faith that heals–and He will. Then, go and share it with the world.

Thank you, Lord, for equipping us to serve you with our lives and for your Spirit that empowers, unites and guides us. Help us, Lord, to be obedient to your call, without wondering what’s in it for us and worrying what might happen. Let us not become too focused on stuff and money so that it gets in the way of doing the ministry you desire us to do. Open our hearts and minds, Lord, so we can understand when you come down to our level and speak to us through all our senses. Teach us to welcome the stranger into our homes and hearts and trust the stranger to welcome us into their home and heart. And for the journey you have called us to travel, strengthen our faith, a faith that heals. In Jesus’ name we pray. Amen.