The Presbyterian Church of Coshocton 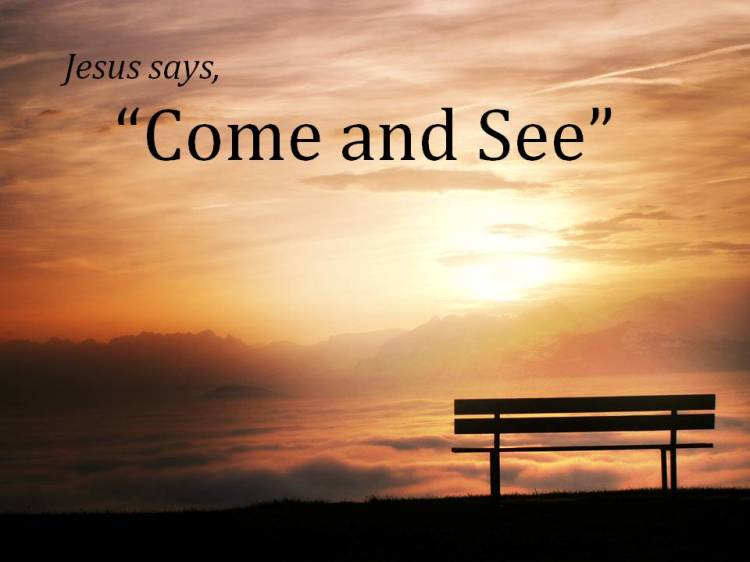 29 The next day he saw Jesus coming toward him and declared, “Here is the Lamb of God who takes away the sin of the world! 30 This is he of whom I said, ‘After me comes a man who ranks ahead of me because he was before me.’ 31 I myself did not know him; but I came baptizing with water for this reason, that he might be revealed to Israel.” 32 And John testified, “I saw the Spirit descending from heaven like a dove, and it remained on him. 33 I myself did not know him, but the one who sent me to baptize with water said to me, ‘He on whom you see the Spirit descend and remain is the one who baptizes with the Holy Spirit.’ 34 And I myself have seen and have testified that this is the Son of God.”

35 The next day John again was standing with two of his disciples, 36 and as he watched Jesus walk by, he exclaimed, “Look, here is the Lamb of God!” 37 The two disciples heard him say this, and they followed Jesus. 38 When Jesus turned and saw them following, he said to them, “What are you looking for?” They said to him, “Rabbi” (which translated means Teacher), “where are you staying?” 39 He said to them, “Come and see.” They came and saw where he was staying, and they remained with him that day. It was about four o’clock in the afternoon. 40 One of the two who heard John speak and followed him was Andrew, Simon Peter’s brother. 41 He first found his brother Simon and said to him, “We have found the Messiah” (which is translated Anointed[). 42 He brought Simon to Jesus, who looked at him and said, “You are Simon son of John. You are to be called Cephas” (which is translated Peter).

We celebrated an important birthday in our family this week. On Friday, our eldest granddaughter, Jessie, turned 6. Jessie lives with her baby sister, Madeline, and her parents in Cambridge, Massachusetts. We don’t get to see them in person very often, maybe one week a year. But in between in-person visits, we connect through modern technology. On Friday night, we visited with them in their living room with our Ipad and Google Duo.

When we answered the call, how special it was to be invited to draw closer to those whom we love–Danny, Hiu-Fai and their children–Jessie and Maddie, aged 2. She is harder to see than the others when we video chat. She keeps on moving! At first, all we saw of Maddie was a strip of her forehead, as she peered into the computer screen, trying to figure out my identity. I heard her say, “Grandma? Grandma?”

You see, she and her sister have 3 grandmas, and they get to see the other grandmas more than they see me. So big sister Jessie, having known me 4 more years than Maddie, introduced us. “That’s Grandma Karen,” she said with the authority that only an older, wiser sibling can have.

One by one, Jessie opened the gifts we had sent her, with Maddie right beside her. Her little hand kept coming up and being brushed away.  “No, Maddie!” Jessie would say, firmly. She didn’t want her to touch or even look at her new books or the glow-in-the dark press-on stars for her ceiling or the fairy garden kit with real seeds to plant. She didn’t want her anywhere near the new jean jacket and long-sleeved shirts, with a sequined butterfly that changes in appearance when you rub it the other way, and a snow globe that moves with its wearer.

The video chat ended with Maddie wailing in frustration and their mother carrying her away, speaking soothing words to comfort her. Maddie just wanted to come and see—with all her senses—and be seen and loved, given gifts and made to feel special. How difficult it is for her to understand that it will be her turn to be celebrated in September. What does time mean to a 2- year-old?

Birthdays are new beginnings, a change in identity. For Jessie is no longer 5 and will never be. She is measurably different than a year ago, in body and mind. Today is a new day, a new world, for Jessie and her family.

And so it is with the first disciples in the gospel of John, when the Baptizer introduces them to the one for whom Israel had been waiting. It is John’s testimony that transforms their world; their calling is a rebirth.

With prophetic eyes that see the end at the beginning of Christ’s ministry, John points to the cross. He says, “Look, the Lamb of God who takes away the sin of the world.” What he’s really saying is, “Now, finally, this is the only sacrifice that will ever be needed to take away the sins of the world.”

John, as the son of the priest, Zechariah, understands the rituals of the Temple and its sacrifices. Exodus 29:38-42 tells us about the 2 lambs offered each day, one in the morning and one at night, daily sacrifices for communal sin until 70 A.D., when the Temple is destroyed. When John calls Jesus the Lamb of God, he may be thinking of the Passover, when the blood of the slain lamb protects the Israelite families on the night they leave Egypt in Exodus 12:11-13. The Angel of Death claims the lives of the first born in Egyptian families, but passes over the Israelite households with doorposts covered by the blood of the lamb. With his image of the Lamb of God, John joins with the long tradition of Old Testament prophets. Isaiah 53:7 and Jeremiah 11:19 speak of the one “like a gentle lamb led to the slaughter.” Through suffering and sacrifice, the lamb redeems God’s people. Still another image of the Lamb of God, familiar to John’s first audience but strange to us, comes in the time of the Maccabees. The Jewish rebel warriors fight and regain control of Judea from the Seleucids in the Second Century BCE. The horned lamb is not the symbol of gentleness, helplessness or meekness, then, but the symbol of a conquering champion of God.

In the New Testament, the “Lamb of God” is embraced by the writer of Revelation, who uses the phrase 29 times! It becomes one of the most precious titles for Christ, summing up his suffering and sacrifice, his love and triumph.

All of these images bring layers of meaning to audiences over the centuries who listen to John’s introduction, “Here is the Lamb of God.” But it isn’t until the first disciples follow Him that they begin to understand who and what he is. As they take their first steps of faith, Jesus turns and meets them halfway, just as when we draw nearer to God, the Lord draws nearer to us. “What are you looking for?” Jesus asks. These first disciples have no idea what to say.

This stirs memories for those who know how the story ends, and that the end is just the beginning. We know about Easter morning in John’s gospel, when first the angels, then Jesus, looking like the gardener, asks Mary, weeping at the tomb, “Who are you looking for?”  When he calls her by name, finally, she recognizes him.  “Rabboni!” she answers, which John will translate, once again, as “Teacher,” an echo of today’s passage in the first chapter, when the disciples feel compelled to ask the one on whom the Spirit descended and remained, “Rabbi, where are you staying?”

The Lamb of God says mysteriously, “Come and see.” And they came and saw, and stayed with him. And then at 4 o’clock, “one of the two who heard John speak and followed him, Andrew” goes to find his brother Simon to tell him the good news. “We have found the Messiah,” he says.

When he brings his brother to Jesus, the Lord gives him a new name–Cephas in Aramaic; Petros in Greek, meaning Rock or Stone; Peter, to us. And the other, unnamed disciple, who heard the Baptizer and responded to the call? John, very likely a young man at the time, maybe a teenager, and perhaps the brother of James, one of Zebedee’s sons.

We who have come to worship today have come seeking, just as those first disciples introduced to the Lamb of God. In the hearing of the gospel, and in our beholding of the Lord, we are continually transformed.

Be lifted by the hope and promise of new beginnings, not just in this new year, but in the new identity you have in Jesus Christ. Nothing in this world can ever take that away from you. You know the Messiah! You have seen the Lord.

Friends, I urge you to share your stories, like Andrew and the Baptizer. Tell what God has done. For the Spirit that descended on Christ and remained on Him, now remains in us. And the Lord who welcomed the first disciples to stay with him, makes his home with us.

Do you want to know the Lamb of God more? Do you want to feel special and loved? Keep seeking the Source of all life, the One who IS love. James tells us that every good gift comes from above. The Lord wants to talk to us, as he did the first disciples and Mary at the empty tomb.

“What or whom are you looking for?” says the Lord, to you and me.

“Come and see,” He says, mysteriously.

Let us pray. Holy One, thank you for sending the Lamb of God to take away the sin of the world. Thank you for your mercy and grace. Help us to feel your loving presence with us now, hear your voice, and answer the call. We are looking for you. We want to know you more. We welcome your transformation. Give us courage to share our testimonies and tell of your faithfulness to our children, grandchildren and great-grandchildren. We ask for help and healing for families and communities, provision for those who cannot find work, are underemployed, or fear for the future of their jobs; those who are sick in body and mind and those who are struggling with addictions. Teach us to walk in your loving ways and bring hope to the hopeless, never growing weary of doing good until all respond to your invitation, “Come and see,” with “I have seen the Lord.”  We pray in the name of our precious Redeemer. Amen.

I am the pastor of First Presbyterian Church of Smithtown, New York on Long Island. Come and visit! We want to share God’s love and grace with you and encourage you on your journey of faith. I have served Presbyterian congregations in Minnesota, Florida and Ohio since my ordination in 2011. I am a 2010 graduate of Princeton Theological Seminary and am working on a doctor of ministry degree with Austin Presbyterian Theological Seminary. I am married to Jim and we have 5 grown children and two grandchildren in our blended family. We are parents to fur babies, Liam, an orange tabby cat, and Minnie, a toy poodle. View more posts